Under a certain set of circumstances, Vettel would have wrapped up the championship on Sunday, but the German will have to wait until at least the Japanese Grand Prix to be crowned for the second time.
McLaren’s Jenson Button took second place after putting some pressure on Vettel late on, with the Briton’s result ensuring that Vettel still needs a further point to secure the title.
Mark Webber took third place in the other Red Bull, ultimately coming out on top of a race-long battle with Fernando Alonso, who finished fourth for Ferrari.

Lewis Hamilton suffered from being squeezed by Webber at the start, before clashing with Felipe Massa, but the McLaren man again showed impressive resolve and skill to take fifth position.
Force India’s two-stop strategy helped Paul di Resta to record a career-best sixth place, with Nico Rosberg seventh for Mercedes, who suffered a retirement when Michael Schumacher crashed out midway through.
Adrian Sutil was eighth in the second Force India and Ferrari’s Massa ninth after a late pass on the Sauber of Sergio Perez, who completed the points-scorers.
Vettel got away well from pole, whilst Hamilton powered off the line and challenged Webber for second. The Englishman, however, was squeezed by Webber and got bottled up, eventually ending the first lap back in eighth place. 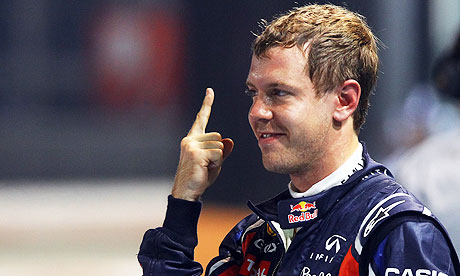