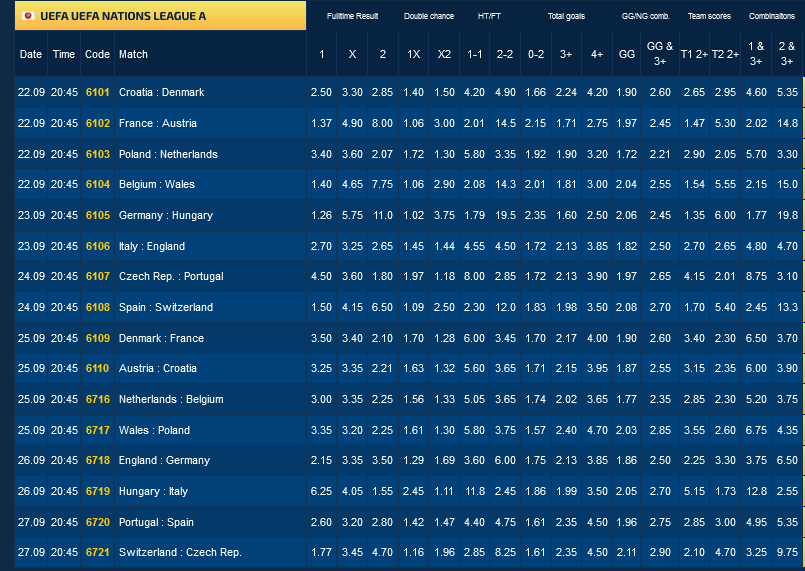 What are your prediction for the match Italy vs England?

Bradd said:
What are your prediction for the match Italy vs England?
Click to expand...

Italy could win, their fans are hungry for some success.

ALEXXXXXXX said:
Wise to bet on under 2.25 goals🤑
Click to expand...

I think the match will be more active...
B

RiderJake said:
I think the match will be more active...
Click to expand...

Hello, what are your insight about the event?
S 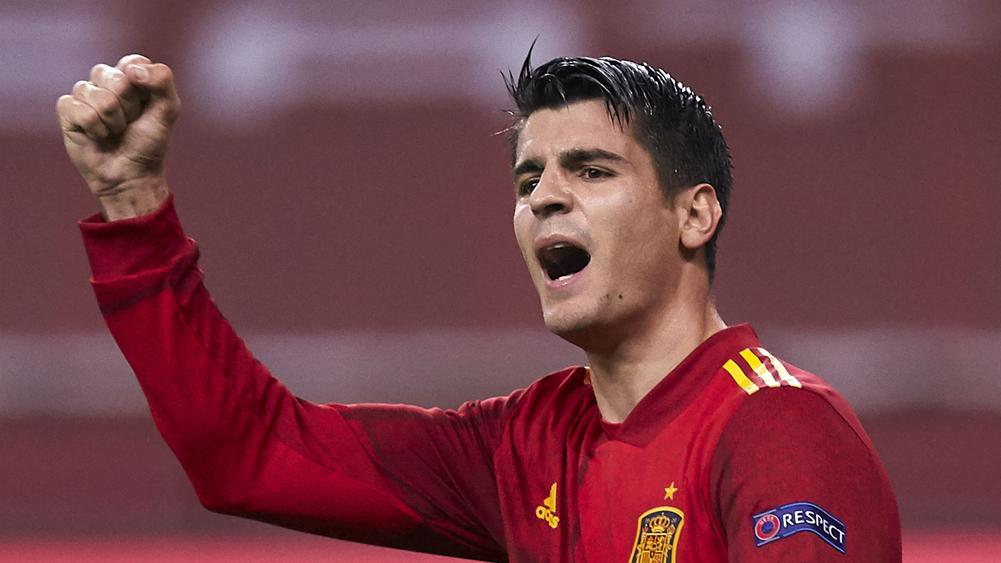 Spain welcome Switzerland to Zaragoza for Saturday's League A Group 2 clash. The hosts could secure place in the finals with a victory here, while the visitors are at risk of being relegated to League B. The start of the campaign wasn't too successful, La Roja dropped four points in the opening two matches. Spain played 1:1 with Portugal and then 2:2 with Czech Republic. The next period was much better as they managed to beat Switzerland with 1:0 in Geneve and Czech Republic 2:0 at home. Coach Luis Enrique is doing a great job and Spain are between the favorites for the trophy, not only in UEFA Nations League, but also they are genuine World Cup contenders. But he has lot of injury worries ahead of September's fixtures. Aymeric Laporte and Mikel Oyarzabal are out injured, while Ansu Fati and Thiago Alcantara have also been left at home. Veteran players David de Gea and Sergio Ramos will not be part of the squad this month either. Unai Simon could start at goalkeeper's position in De Gea's absence. It is a big surprise that Jordi Alba was called in the national team as he is a reserve in Barcelona.

Switzerland have started the campaign with three defeats. First they lost 2:1 to Czech Republic, then suffered a heavy 4:0 defeat in Portugal and lost 1:0 in the reverse fixture with Spain. Nevertheless they managed to obtain the first success in the fourth round when beat Portugal 1:0 at home. The Rossocrociati secured three points thanks to Haris Seferovic early goal. He scored after just 57 seconds to keep Switzerland's hopes of survival in League A alive. Coach Murat Yakin is well aware of the importance of this match, not only in term of relegation. Cameroon, Brazil and Serbia are the opponents in a challenging World Cup group and playing with another top side is a benefit the Rossocrociati. Yakin also has some injury issues. Salzburg striker Noah Okafor is not involved this month due to reported dental issues. Ricardo Rodriguez, who missed Torino's most recent match due to a fever, is rated as doubtful. Kevin Mbabu could be forced to fill in at left-back if Rodriguez is not passed fit, but the latter will have had ample time to recover from his illness.

As I've mentioned before, Spain won the reverse fixture played in Geneve. Pablo Sarabia scored the only goal when the sides met in June. Historically, Switzerland have only ever won one of their 24 previous mutual games with Spain, which came in the group stage of the 2010 World Cup. I don't expect any different outcome now. Spain are big favorites and I expect to win this match.

Spain vs Switzerland Pick: Spain to win @ 1.50 with Everygame
S

The Netherlands welcome Belgium in Amsterdam in a derby match of Group D. Oranje are on the top of the group with 13 points, three more than second-placed Belgium. The Dutch national team have won four of their five group games and defeated Belgium 4:1 when the sides met in June. The Netherlands must avoid defeat against second-placed Belgium in their final fixture to qualify for next summer's Nations League finals. Just to mention, Oranje are currently enjoying a 13-game unbeaten run, dating back to June last year when they lost 2:0 to Czech Republic in the knock-out rounds of EURO 2020. Belgium remain within touching distance after they beat Wales on Thursday. The Netherlands secured an important 2:0 win against Poland in Warsaw. Cody Gakpo met Denzel Dumfries' low ball into the box to put the visitors ahead after just 13 minutes. Steven Bergwijn secured the victory with a curling finish on the hour mark. Louis van Gaal's men are unbeaten so far in the group and they are between the candidates for the trophy. The experienced coach has two worries as Memphis Depay and Teun Koopmeiners have picked up an injuries against Poland. They are rated as highly doubtful, so the medical team will have the last word.

As I've already wrote, Belgium have 10 points, three less than Netherlands. It is clear they will need to win this match to have a chance at claiming a spot in the finals. But not only that, the Red Devils will like to erase the memories of a shameful 4:1 home defeat in June. The actual form is good, Belgium managed to beat Wales 2:1 on Thursday. Kevin De Bruyne was the key name on the match. He gave his national team a lead after 10 minutes and assisted Michy Batshuayi for the second in the 37th minute. Belgium dominated the game with more than 70% possession, but the result could easily be different if Wales players were more focused in the finish. De Bruyne was awarded a penalty in the second half, but VAR intervened to overturn the call. Belgium manager Roberto Martinez was sent off in second-half stoppage time after trying to prevent a Welsh counter-attack. He will probably serve a suspension. But more important, all the players are ready and they could go again with an unchanged starting eleven. If Martinez decide to freshen things up, then Timothy Castagne could replace Thomas Meunier at right wing-back. In the absence of Romelu Lukaku and Divock Origi through injury, Batshuayi will try to continue with goals.

The last mutual game was in June, in Brussels, when Oranje demolished the Devils 4:1 in front of their own crowd. I expect some reaction from the Roberto Martinez' men. Both Netherlands and Belgium are very offensive-minded teams. That is why I am expecting an efficient match. At least three goals should be scored here.

England welcome Germany in the UEFA Nations League at Wembley Stadium on Monday. Both national teams have nothing to play for, except pride. However, the outcome of the match is extremely important. England are in awful form ahead of November's World Cup in Qatar. The fans are frustrated and most of them have no hopes about their chances for the trophy, despite the fact that have relatively easy group - Iran, Wales and United States are their opponents in Group B. The Three Lions are in poor form at the moment, with two defeats on the last two matches in UEFA Nations League. With only two points from five matches, they will finish last in Group 3 of pot A. But something else is a bigger problem - the last performances of the national team are catastrophic. After they lost 4:0 to Hungary, which was their heaviest home defeat in 94 years, Gareth Southgate's men lost 1:0 to Italy on Friday. The manager came under heavy pressure, even nobody expect changes in the final international break before the World Cup. A big concerning factor during England's winless run has been the lack of goals. The Three Lions have now gone 495 minutes without scoring in open play, with Harry Kane's penalty against Germany in June their only Nations League goal. Just to mention, San Marino are the only other nation yet to score a non-penalty goal in the 2022-23 Nations League. It is clear Southgate will make lot of changes for this match. Jack Grealish is sidelined through suspension, while Jordan Henderson is rated as doubtful following a hamstring injury. Bukayo Saka struggled to adapt to his left-wing back role against Italy. Aaron Ramsdale, Kieran Trippier, Luke Shaw, Mason Mount, Ivan Toney, Ben Chilwell, Marc Guehi and John Stones could provide fresh legs.

Germany suffered a narrow 1:0 home defeat from Hungary on Friday. Adam Szalai scored the winner as he met a corner with a spectacular backheeled flick that looped into the far corner. German players looked confused after the goal and needed 39 minutes to register a shot on target, but Thomas Muller's back-post header was comfortably saved by Peter Gulacsi. Coach Hansi Flick made a tactical change at half-time, with West Ham's Thilo Kehrer replacing Serge Gnabry and it allowed the hosts to dominate, having 80% possession in the opening 15 minutes of the second period. It also brought some chances, but Leroy Sane's effort was saved at the near post, while Muller's 20-yard volley was disallowed for offside. Germany drop to third place in the group after Italy’s narrow win over England. It’s a real bummer, but maybe a string of losses is just the shake-up that these players need. They are free from pressure considering the fact that Germany are unable to qualify for the finals, but at the same time they have no relegation fears. Flick is also expect to make some changes. Antonio Rudiger will miss the game due to suspension, while Leon Goretzka and Manuel Neuer are doubtful. The duo missed the defeat to Hungary due to COVID-19 infection. Julian Brandt was also forced to leave the camp through a different infection. Timo Werner will probably be replaced by Kai Havertz.

I expect both teams to score at Wembley. The fixture presented Southgate and Flick with their final opportunity to trial players and tactics before World Cup openers in November. Both teams suffered defeats on Friday and some reaction is expected. England play at home and they will try to end their goalless series. But German players will also want to get a positive result after the painful defeat from Hungary. I expect strong reaction from both sides.