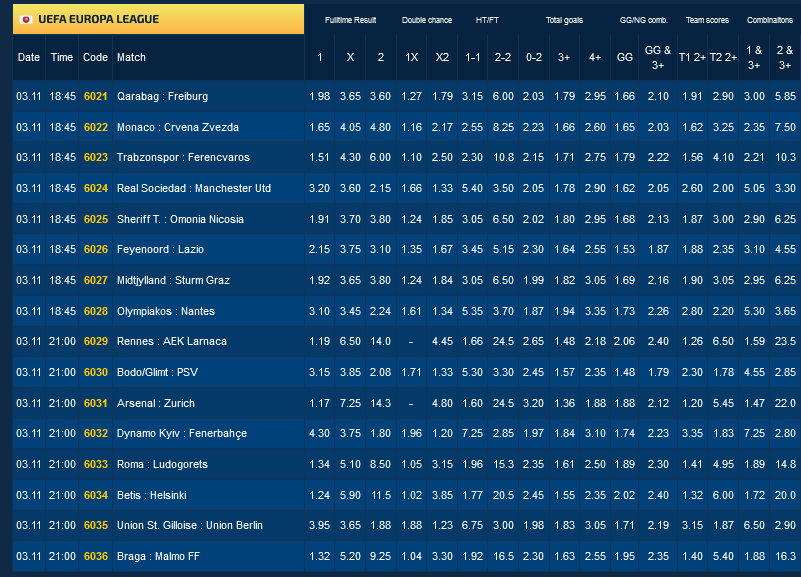 The situation in Europa League Group C is very interesting, despite the fact Betis are definitely first, while Helsinki are last. Roma and Bulgarian side Ludogorets Razgrad will face at Stadio Olimpico on Thursday night in a direct battle for the second place. Both teams have seven points, but the Italian outfit need a victory to secure a place in the knock-out phase. On other side, a draw is good enough for Ludogorets, they only need to avoid defeat. The reason is because Roma lost 2:1 in Bulgaria on the opening day. A mistake from Chris Smalling allowed Cauly Oliveira to find the back of the net in the 72nd minute. Although Eldor Shomurodov’s strike brought Roma back into the game in the 86th minute, Nonato restored the lead for Ludogorets two minutes later. The game ended in a 2:1 win for the Bulgarian club and that is why Mourinho’s side are in must-win situation now. A draw will mean both teams have eight points, but H2H record will be on Ludogorets side.

Roma are in solid form at the moment. They are in mini-series of two victories across all competitions. I believe the atmosphere in the squad is much better now, while the players confidence is higher. First they beat HJK Helsinki in Finland and then Verona in Serie A. Tammy Abraham's header and an own goal scored by HJK's Arttu Hoskonen secured a narrow 2:1 victory against Helsinki. On Monday night the Giallorossi visited Verona. It was a dramatic match that was decided in the finish as young Cristian Volpato netted in the 88th minute, before Stephan El Shaarawy secured a 3:1 win in the stoppage time. Mourinho wil probably rotate the players for this match, so Andrea Belotti, Nemanja Matić and Cristian Volpato may start the match from the first minute. The Special One also has some injury worries. as Paulo Dybala, Georginio Wijnaldum and Leonardo Spinazzola are out injured, while few more are rated as doubtful.

Ludogorets Razgrad are the best club in Bulgaria in the last period. As I already wrote, they have seven points, level with Roma. In the last round Ludogorets lost 1:0 to the group leaders Betis. According to me, they deserved more from that match, however, suffered a narrow defeat after failed to score. The domestic results are solid and Ludogorets beat the last four opponents in First League - Septemvri Sofia, Botev Plovdiv, Beroe and CSKA Sofia. The Eagles currently sit five points behind the leaders CSKA Sofia, but have two games in hand. Coach Ante Šimundžić is doing an excellent job and the fans are satisfied. Of course, he will become a hero if his players remain unbeaten at Stadio Olimpico. Šimundžić has no important missing players and should name a similar side to that which lost against Betis. Brazilian Cauly, who scored the opening goal in the reverse fixture in September, will try to upset the favorites once again.

I expect Under 2.5 goals here. The importance of this match is very big, so I think this will be a tight encounter. Roma need the victory, but they will not risk too much. Jose Mourinho is known for his defensive approach and this game won't be an exception. The stake is very big, a place in the knock-out phase. Mourinho's philosophy is to not concede, only then to try to score. A draw is good enough for Ludogorets, so it is clear they will put the focus on defense. I don't expect many goals at Olimpico.