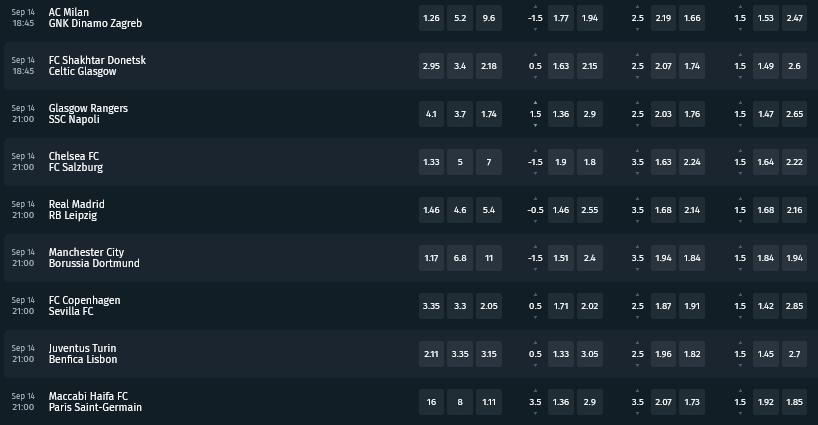 Hotspur play well this season as a result of a deeper bench, getting a seven-match unbeaten run despite a two-fronted attack on European games and PL games.

Sporting are less experienced than Hotspur in European games. But they can not be ignored because they got a 0-3 away win from Frankfurt in the last European games.

When they last met in 2010, they were tied. Considering that they have both scored two goals on average of the most recent games, I think the total goals of the upcoming game will be over 2.5 and the victory is tending to the guest team.

I would say that Tottenham is stronger.
S

Liverpool welcome Ajax Amsterdam to Anfield in the second round's fixture of Group A. The start of the campaign was awful for Jurgen Klopp's men. The Reds were embarrassed 4:1 by Napoli last week. This match is very important for Klopp as another defet could means elimination. The German coach is under big pressure at the moment, maybe the biggest in the last seven years. The slow start of the season opens lot of question. Pundits and journalists alike are all providing their own theories for Liverpool's crisis - most of them connect with Sadio Mane's departure, But the former Liverpool defender Jamie Carragher has another theory. According to him, the team looks very tired and a little lost. He expressed his concern about the future of the squad, that has won it all under Klopp’s leadership. Liverpool managed to secure just two wins in the first seven official matches this season. To be worse, Klopp has big injury issues as lot of players remain injured - Naby Keita, Alex Oxlade-Chamberlain, Curtis Jones, Ibrahima Konate, Jordan Henderson and Calvin Ramsay will all miss the match. Thiago Alcantara, who returned from injury and came in against Napoli as substitute, is expected to start here. Joel Matip will definitely replace poor Joe Gomez in the defense. The key player Mohamed Salah looks out of form and it won't be surprise to start from the bench. Andy Robertson is the latest victim after sustaining a knee injury in the defeat at Napoli.

Ajax opened the European campaign with a high 4:0 win over Glasgow Rangers. It was a powerful performance against the club that have eliminated PSV in the previous stage of the competition. Edson Alvarez, Steven Berghuis, Mohammed Kudus and Steven Bergwijn found the back of the net in Amsterdam. The Dutch outfit are in excellent form having won their seven games this season. That included a 5:0 victory over Heerenveen in the Eredivisie on Saturday evening. Kudus was named as 'Man of the match' after scored a brace, while the remaining three goals were scored by Davy Klaassen, Kenneth Taylor and Brian Brobbey. Ajax are sitting top of the Eredivisie standings with maximal effect, having won all six of their games. More importantly, they’ve only conceded three times. Ajax are in very good form as they have scored 13 goals on the last three matches across all competitions and kept clean sheet at the same time. The players confidence is high and most of them are ready for this match, but full-back Owen Wijndal is still sidelined with an ankle injury. He has returned to training, but this match will come too soon for him. Calvin Bassey left the match against Heerenveen after received a knock to the foot and he is doubtful.

I expect an efficient match at Anfield. Liverpool lost 4:1 to Napoli and I expect some reaction. Ajax are in very good form, they have scored 13 goals on the last three matches across all competitions. At least four goals should be scored.

Plzen has nothing to lose, just enjoy their presence + Inter is the most playable opponent. Plzen managed to score at Camp Nou and I believe it will repeat tomorrow.
Betfather.tips - football betting picks community