If you are looking for ways to limit your losses as a bettor or you're ready to start making informed analytical betting decisions, this article is for you.
You might also want to continue reading this article if you are a pundit or a football fan. It would be worth every second of your time.

The term xG stands for "Expected Goals."
'Expected Goals' is an advanced metric that has been in use in other sports like basketball and American football for some time now but it was incorporated as a football analytic tool more recently.
xG metrics can be applied to any sport where goals can be scored and where the number of such goals determine the winning side (team).
As you must have known, one of the many essences of football is to score goals, hence, clearly, xG metrics are a perfect fit in football analyses.
This system of metrics is not entirely new in football betting as bettors who wager on football matches have used other metrics like "Total shots'' and "Shots on target" in time past to make calculated risks when placing football bets.
The essence of xG in football betting is for a bettor to predict beforehand the chances of a team winning a match based on the available data of the team's previous performances.

xG is a metric that calculates the quality of the chances of scoring a goal. A xG value between 0 and 1 is usually given to shots played which represent the probability of a shot resulting in a goal. xG values are obtained from a set of databases of shots taken in time past by a team. Through data simulation, a set of calculations can be done to determine the chances of scoring a goal from several positions of play from the database.

A simple example, in the below image you can clearly see that Man Utd(xG 2.35) had better scoring opportunities than Watford(xG 0.63). The match went on to finish 1-1. In this case, the team that had better goal-scoring opportunities did not win. But we can use that data from this match to predict future matches of these teams. 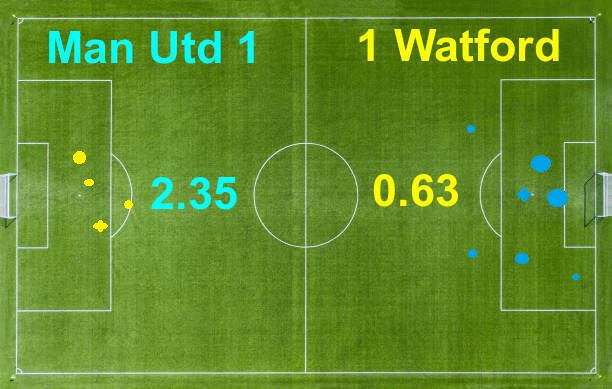 There are several variables from which Expected Goals value can be calculated. These include:


In arriving at the right xG value, it is imperative to note that shots taken at wild angles are more likely to result in a goal than those fired at narrow angles. The highest xG value for a given shot is 1 and this tells us that the shot was taken at a spot or a position where there is 100% chance of it flying into the back of the net. However, this is not obtainable in an ideal situation, still higher xG values are to be more trusted in determining a goal than lesser ones as they show higher rate of shots conversion.
In practical terms, the closer the distance from where the shot was played to the goal line, the greater the chance of it turning into a goal. A shot taken outside the penalty box has less chances of scoring than one that was taken inside the penalty box.
Generally, xG models ascribe a constant xG value of 0.76 to penalty kicks.
A shot that is close to the goal line is given a relatively high xG value of around 0.9 or 0.8 depending on how close it is and a shot that is far away from the goal line is given a low xG value of 0.4 or less.

Another closely similar concept to note is xA, it stands for "Expected Assists."
In clear definition, Expected Assists (xA) metric pulls in data from the database to calculate the chances of a creative pass turning into an assist.
As it would be expected, there are several factors to consider before arriving at a good xA value. Normally, what this metric notes is the quality of a pass and not whether the pass results in a goal.
To calculate xA value we are less concerned about the rate of conversion of a given pass but on the quality of the creativity in the pass itself so it is possible to find a player with zero assist having a significantly high xA value.
xA values give a more accurate prediction of the player who is likely to have an assist in a match. In practical sense, the player who has the most xA value in a team is more likely to have an assist in the next match than the player who had an assist in the previous match — as far as stats is concerned.

Demerits of xG in football betting​

Like any other metric, Expected Goals have its own limitations and lapses — these are important factors that ought to be considered but are not infused in most unsophisticated xG metrics.
Some of them are listed below:

Other factors include the conditions of play such as, the weather condition and wind velocity as they can all impede the trajectory and the speed of the ball.
It is worthy of note that some more complicated xG models take some other complicated factors into consideration, like the style of play of the two teams — as it is known that an attacking style of play leads to more created chances than a defensive style of play.

Merits of xG in football betting​

Through the course of this article, I have shown the advantages of Expected Goals, however, for the case of clarity, I will itemize them below:

To put the pen to a stop, the merits of xG as an analytic tool in football betting clearly outweigh its demerits. Bettors, pundits and football fans can all do well to use this metric for more informed football knowledge and decisions.