History of the creation of the Football World Cup

In 1904, FIFA (Fédération Internationale de Football Association), which was founded by the French journalist Robert Guérin and had seven member countries, decided at its first congress to set up an international competition, the first of which was to take place in Switzerland the following year. However, under pressure from the British, this project was not carried out.
Under the impetus of its president, the Frenchman Jules Rimet, FIFA decided to organise a World Cup on 28 May 1928. It chose Uruguay as the host country on 18 May 1929 to celebrate the centenary of the country's independence, but also because the country agreed to pay the participation fees of the teams and to build a new stadium, the Estadio Centenario, in a difficult economic context .
but only thirteen accepted the invitation, nine from the American continent and four from the European continent. Few European teams accept to participate because of the two-week boat trip. 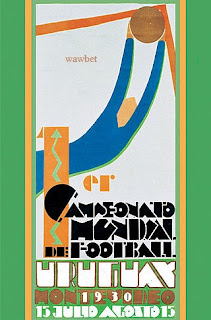 The first two matches of the World Cup were played simultaneously and saw France beat Mexico by four goals to one and the United States beat Belgium by three goals to nil. The first goal of the tournament was scored by Frenchman Lucien Laurent. The two big favourites of the tournament, Uruguay and Argentina, easily qualified for the final.

at the final amtch Argentina led by two goals to one at half-time, but the Uruguayans managed to turn things around in the second half by scoring three goals, eventually winning by four goals to two in front of nearly 70,000 spectators.
This World Cup is considered a great sporting success, with matches of a very high standard, but also a popular success, with more than 500,000 spectators for the 18 matches of the competition.(more) 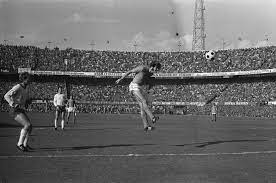 The history of the first world cup in Uruguay 1930