The first professional match I ever attended - Sheff Wed v Man Utd, 31st August,1968. My late Dad took me and I would then be 9yo. There were 52,000 fans in the ground and I remember it was a lovely sunny day!. United, of course, were reigning European Champions having won the European Cup only three months earlier in May at the end of the previous season. Apart from a couple of changes, it was the Utd team that had won the Euro Cup - and seeing as those changes were the inclusion of Denis Law (injured for the Euro Final) and the newly signed Wille Morgan, it was hardly a weakening!
An incredible "baptism" for me - a wonderful match in which Wednesday ran out 5-4 winners. United's magic triumvirate of Best, Law & Charlton all played and all scored - Law scoring twice.
Wednesday took an early lead, with Utd quickly replying with goals from Bestie & the Lawman. The Owls then equalized for 2-2 - all within the first 15 minutes of the game. Utd then took control and went 2-4 up, but Wednesday snatched one back to make it 3-4 on the stroke of HT. Wednesday then stormed back in the first 20 mins of the 2nd half. Witham forcing an equalizer, then breaking away for the winner. I recall Megson (Don, Gary's father) having a piledriver disallowed because of a Wednesday player stood in an offside position - a goal that would probably stand under today's rules. I remember Utd laying siege to the Wednesday goal in the last 20 mins, with a couple kicked off the line, but they couldn't force an equalizer. A draw would probably have been a fair result.
Jack Whitham scored four for Wednesday on the day (I think one may later have been chalked off as a Nobby Stiles OG), John Ritchie with the other. Witham scored a lot of goals early season and earned a transfer to Liverpool, but never really made the grade there.
Neither club had great seasons, Utd finishing halfway down the league in 11th, The Owls four places lower in 15th. Although Utd did get to the Semi-Final again in the European Cup, losing narrowly to eventual winners, AC Milan. For United this season was arguably the start of their long, slow decline to relegation in 1974 as older players weren't properly replaced with the same quality, Bestie started to go AWOL and the shadow of Sir Matt weighed heavily on subsequent managers (history always repeats?). For Wednesday it was also the beginning of a decline, with relegation from Div 1 the season after (1970) and then many seasons in Div 2 and Div 3 - not regaining a top-flight slot until 1984.

Done a bit of an edit on above as more came back to me! Be great if anyone has any pictures from the game. I know it wasn't televised, but there were definitely some pictures in the "Green Un" - Sheffield's Saturday night sports paper. Here's a contemporary pic of a Utd v Weds match, but Utd are at home here: 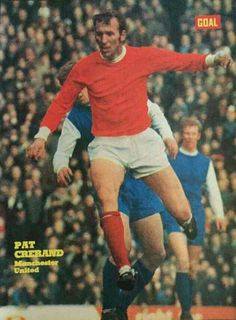 Just a postscript, some 6 years later, then both clubs in the 2nd Div, also at Hillsborough, Wednesday & Utd battled out a 4-4 draw! - I was at that one too!
B

My first ever Division 1 game in England. Traveled down from Glasgow with my parents as my cousin was a doctor with Wednesday so we had great seats. I think it was also that day that Gary Sobers scored 6 sixes against Glamorgan as I remember it being shown on match of the day. Whitham was unbelievable, however never worked out at Liverpool.
Share:
Facebook Twitter Reddit Pinterest Tumblr WhatsApp Email Share Link
Top