esporttalk.org said:
Ago vs Crew 2/03
Totally underestimated odds for this csgo match
U can play crew for 4.25
1/10
Click to expand...

Bet 365 odds and others - drops from 2.5/2.4 to 2.2. BETJOE offer big odds here and imho worth it now (2.76) . The team from Mongolia is not well known to me and I saw their match against Tiger where they played ncl and nin9 interestingly and on dust2 this match could end up completely different. I think HZ have a little bit bigger odds and here it's still a type worth playing from a mathematical point of view.

Virtus Pro's dream can be considered as finished. Alexey "qikert" Golubev and the company came to this Virus Pro as vice-champions of the Major, so from the beginning they had high hopes. Suffice it to say that from the moment of their transfer, they only won one match..
On Monday, they added another loss to their not so good record, this time in a clash with FaZe Clan. I have been completely disappointed with VP for a long time. But there was a little light in the tunnel.

The team started very well both maps but again can not maintain the result and the game. Maybe something was moving in this team. Of course, it doesn't give them a lot of chances, the team has good moments and even advantage, but still something at some point breaks and wasn't able to maintain a good result, which among other things, among other things, caused her to fall on both Overpass, which was a bit id summary. Maybe fill some arguments but the VP matches with Mouse will surely electrify and I am convinced that the VP team will completely immerse itself in the duel. Mouse is playing a grid so you can't prejudge anything. One map after such a course seems to be profitable.

From the BLAST Pro series: Los Angeles in July 2019, Nicholas "nitr0" Cannell and his crew are having a difficult time. Liquid's poor performance in 2019 stretched to March 2020. During the BLAST Premier: Spring unfortunately failed everyone. Then they finished their IEM Katowice trip in the quarter-final. Liquid entered ESL Pro League Season 11 very well. They really showed a lot of skill beating MiBR (2-0) and 100 Thieves (2-0), although with potentially worse Swole Patrol did not show off. You could say that this team already has. Online matches are often unpredictable and Jake "Stewie2K" Yip clearly had a day off. It's certainly much harder to stay focused for 100% of the match. These results create more questions than answers. One of the matches that stands out is the loss of Liquid 0-2 to Swole Patrol, which we didn't expect from top 5-7 team in the CS:GO world rankings. Taking into account the sloppiness of both rostrings, the most right-handed is Over 2.5 maps. Of course, for me, LQ is a favorite, but closer to a match with 3 rounds

The Zero Group has the current line-up of players with some experience such as BurnRuok, but i have seen a significant drop in the course in favour of the GZ team. Pinnacle initially offered 1.7 now a course in ggbet 1.5. We already have 2.5 for the Airborne team, which I consider a much more profitable bet. The smooth_criminal22 is in great shape on Airborne and all he have to do is play at the same level as before and win guaranteed. On top of that there's a solid pz game which is a stable form that can control the nerves and lead the team. The favorite is GZ but only minor with a 45/55 maximum

source: esports talks
Pure victory of Syman is very encouraging. The top three team consisting of players from all over the world - mou, Keoz, kreaz in the last match seems to have returned to the right track. Good game and a sure win against SMAH. Earlier in the match against Spriti something happened to these players and they played really well below expectations. I think it's a temporary outrage caused by the general chaos in the world. Let's note that the players are from totally different regions of Kazakhstan, Belgium and Sweden, which has a strong influence on the situation on the team. Each country currently has completely different conditions and different problems. But the way of communication does not change, which is typical for the Syman team (mainly remotely) and this is their small advantage at the moment. The minimum rate but the value is.

Bet @ Syman / 2.25
match info
In the last match Syman showed how unequal the team is. The first match completely from the given one, while the second one could have ended with a good result - but in the end it was lost to 42 rounds (20-22 !) . In the match on Overpass there was no difference in the positions of both teams. This team can do a lot, but it can't always approach the match with the right and confident attitude. In the Nordavind team a great level is presented by TENZKI, but the rest of the team plays very average on comparable poses of Syman team. However, when the team plays poorly as last time vs Virtus Pro, even he doesn't help and matches the poor level. I play Syman at 2.25 while most have a course around 2

There is quite a lot going on and changes in Illuminar, but I think this is not the time for a new broomstick effect. Quite a bit of confusion and a fall from 2 to 1.8. Slight but still. In my opinion unjustified. Illuminar is trying to change something and maybe it was good decisions but I don't believe that this team will start playing better every day. Maybe we will see the effects only in a month or even later. Before that, the estimates were different and everyone saw them. Both teams have a terrible series but today I'm closer to believing in a team that still has some schematics. On 1xbet we have 2.13 which is profitable for me.

Virtus Pro is certainly weak but the odds are a little unbalanced. The odds have changed and you can see the moods favouring Spriits but I disagree. After 2.33 it is profitable to risk today to play Virtus who played without the pressure that accompanied them before. Looking at the form of individual players, Spirits is a bit better but mechanically none of the Virtus Pro players stands out from their rivals. If Virtus Pro approaches this game at ease, a 50/50 match is in preparation. For me the course is very attractive for the Polish team while other bookies got about 2.00 and even less (1.8 ?? wtf ) - Imgur. Last VP match was one of those where you could see what the players were doing - lost match but after long and balanced fight with strong BIC.

Match with a team that is a bit underrated and that often has more bad luck in matches than usual. You could say that the luck is good for the better, but this will not always be just part of the truth. EdnPoint plays differently. At first it probably dominates with Offset and then it loses to weak Wisla Krakow. It is a team that plays better with teams a little better than themselves. There is one very strong sh1ro in the gambit, but the rest of them have not played well lately

Gambit Youngsters vs EndPoint , Bet for EndPoint at 2.3

Mad has as much as 53% of the games that are 2:0 snatched during MIBR only 30% 2:0 and 30% with 2:1 score. MIBR is currently better, but I don't believe it will be an easy match. Over 2.5 for me here is obvious. Gabriel Toledo played great in last match but apparently they like to take risks. MIBR secured their place before several days with the win against MAD Lions 2-1. MAD Lions won yesterday against HAVU 2-0 and vie their second chance reach the finals. Here, I expect long match, 3 maps. Probably MIBR will take Inferno or Overpass, they are good on that maps, while MAD Lions usually did not played that maps in the last 3 months. On the other side MAD Lions probably will take Mirage, they are with great % on that map 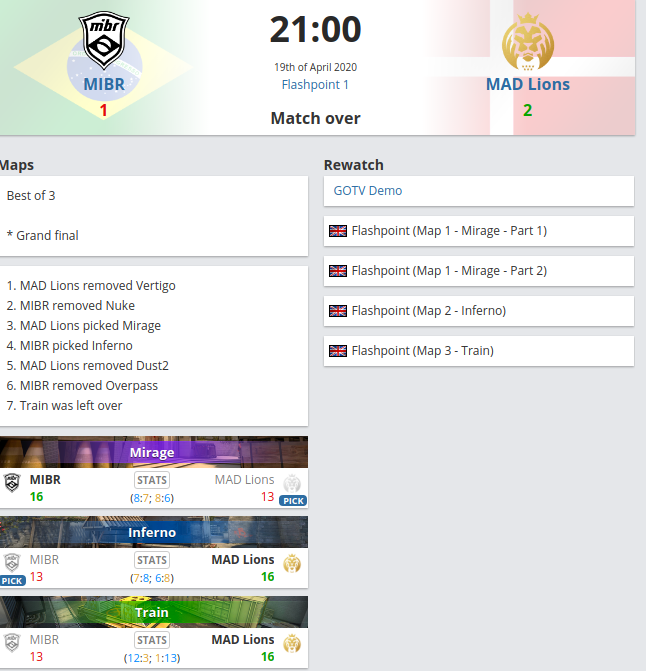 Simple is still mourning his porshe, which was brutally treated in one of the shopping mall parking lots. But people are jealous of it. Today he won't be able to play and he will mourn. Just kidding. Natus is an obvious favorite of this match but today they can play very loose with Virtus and they will not come to the match 100% unconcerned. Navi is a team that finally won the team championship and deservedly won the IEMa, but NaVi is not yet a team like Astralis, which when necessary will force itself and compete on every rival (even Astralis has problems with that). I think that today's match could be one of them. Virtus Pro faded out a long time ago now practically nobody is counting on them but nothing motivates as much as a chance to rebound against the best team in the world from the last IEM. Stable form of Buster and Jamie despite the losses are a good predictor before this match. The interesting thing is that Inferno is the best VP map today.

Simple is still mourning his porshe, which was brutally treated in one of the shopping mall parking lots. But people are jealous of it. Today he won't be able to play and he will mourn. Just kidding. Natus is an obvious favorite of this match but today they can play very loose with Virtus and they will not come to the match 100% unconcerned. Navi is a team that finally won the team championship and deservedly won the IEMa, but NaVi is not yet a team like Astralis, which when necessary will force itself and compete on every rival (even Astralis has problems with that). I think that today's match could be one of them. Virtus Pro faded out a long time ago now practically nobody is counting on them but nothing motivates as much as a chance to rebound against the best team in the world from the last IEM. Stable form of Buster and Jamie despite the losses are a good predictor before this match. The interesting thing is that Inferno is the best VP map today.
Click to expand... 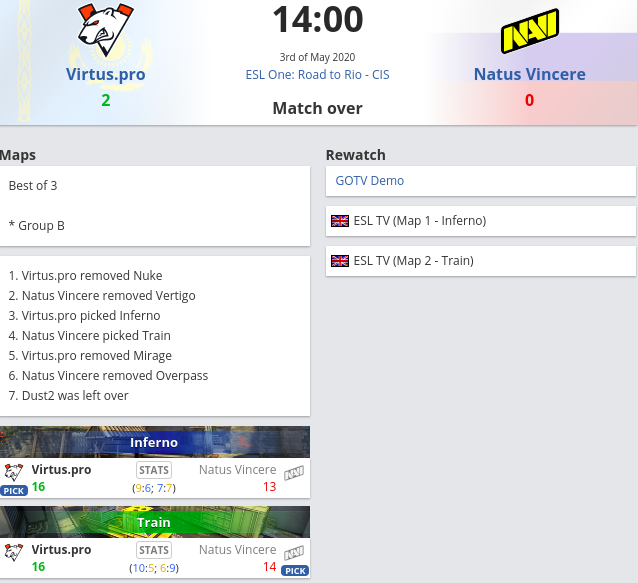 knowing the Team Heretics mentality, AVEZ will be treated with disregard today. On the one hand, it's hard not to be surprised when you've just played with the world's top players. But Heretics unfortunately didn't manage and lost another game. Avez has also had quite uneven results at a much lower level, but they play a lot more matches in regional league and that could be their advantage in this Blade, being in a better match pace. The Avez have nothing to lose and they have to maximize this match while the TH will not necessarily be 100% mobilized on this game. Of course nobody knows that. It was clear from Secret that even a good Mac game didn't help, and besides that there is a deeper problem with communication within the team. 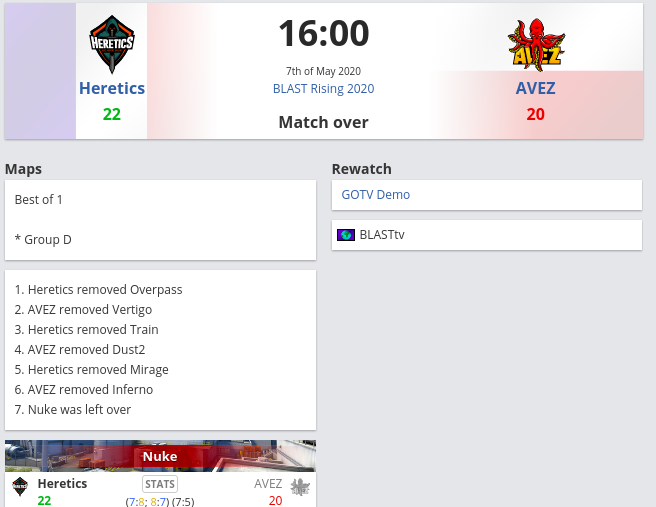