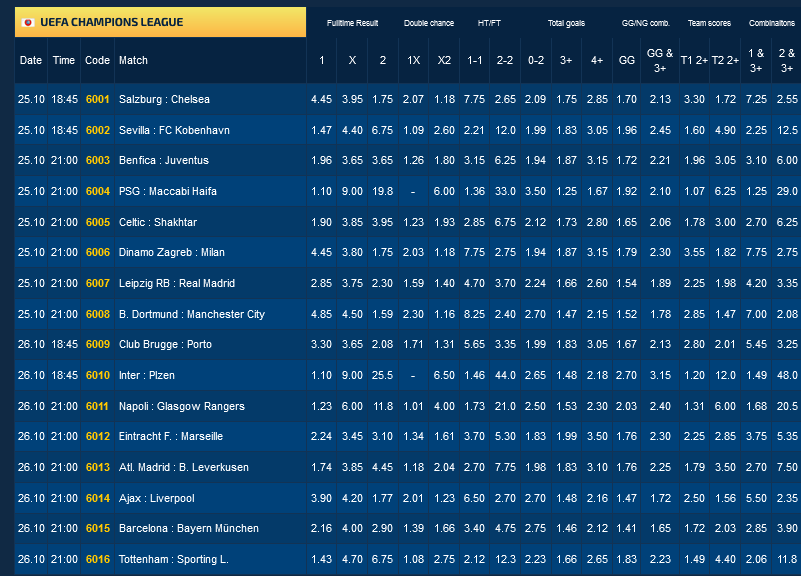 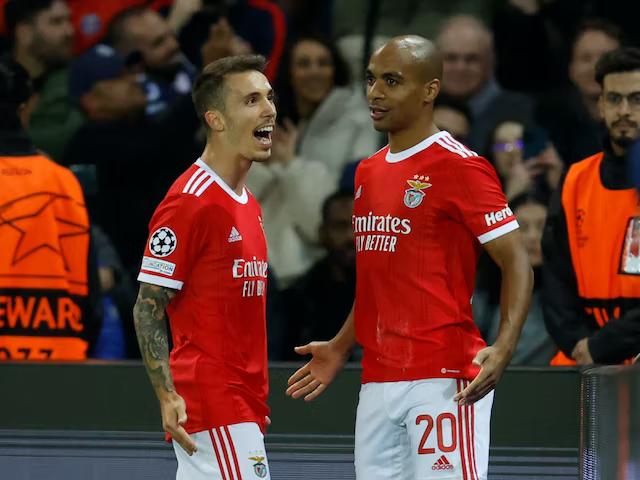 Benfica welcome Juventus to Estadio da Luz on Tuesday night in a very interesting match from Group H. The hosts will secure progress if they beat the Old Lady for the second time, but I think the draw will also be enough for the Portuguese Giants. The reason is simple, nobody expect Maccabi Haifa to take three points against PSG in Paris. However, Benfica are in excellent form and they are favorites here. The Eagles are unbeaten in the new season, even faced PSG twice during October. As You probably know, both games ended with identical result - 1:1. Benfica are equally good in domestic Primeira as they beat title rivals Porto on Friday. Coach Roger Schmidt is doing a good job and I believe the fans are satisfied. The Austrian coach has the majority of his players available, only two are injured. Morato remains sidelined and Julian Draxler joins him after suffering a thigh injury against Porto. On the positive note, winger David Neres, who scored in the reverse fixture, made a substitute appearance against Porto. The midfielder Enzo Fernandez will lead the midfield. He has completed the most passes, made the most tackles and recovered possession most often for the Eagles in Europe this season.

This is a poor season for Juventus as they are far from the top of Serie A. To be worse, the Old Lady lost three of the opening four matches in the Champions League and they need a small miracle to reach the knock-out phase of the competition. Worst of all, they were humiliated by Maccabi Haifa last time out. As a result, the Bianconeri will be eliminated if they do not win here. They could still finish third and continue in the Europa League, but Allegri is well aware this will be rated as failure. This will be the first elimination from the group phase since 2013. If something is positive, that's the domestic form. Juventus managed to beat city rivals Torino and Empoli in the last two matches from Serie A. Alegri has some additional issues as several key players are injured. The former Benfica star Angel Di Maria remain sidelined and his absence is a huge handicap. Leandro Paredes suffered a thigh injury against Empoli and will be out at least one month. Bremer and Mattia Di Sciglio are also out, while both Paul Pogba and Federico Chiesa are long-term absentees. Weston McKennie and Moise Kean hope to keep their places after scoring on Friday, but experienced Arkadiusz Milik is also looking for a place in the starting eleven. Dusan Vlahovic is far from his best and has scored just once in four Champions League appearances so far, but should lead the line.

I expect Benfica to win the match. There are two reasons for my pick. The first is connect with the home advantage. The full Estadio da Luz in Lisboa will be Benfica's 12th player. It will be very hard for Juve players to handle the pressure. The second reason is very simple, Benfica are in better form. While Juventus are in deep crisis, the Eagles are unbeaten this season and the players confidence is higher.

Benfica vs. Juventus Pick: Benfica to win @ 2.02 with Pinnacle
S 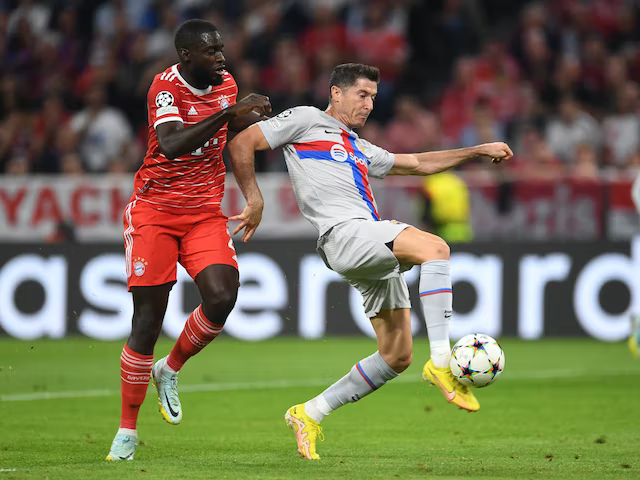 Barcelona welcome Bayern Munich to Camp Nou in the derby match of Group C on Wednesday night. But the situation on the table is very tricky, so this could be a match without significant importance. After four games and with just four points collected, the Blaugrana already cannot catch leaders Bayern who have 12 points. Inter Milan are within touching distance but Barca need to finish the group stage with more points than the Italians if they are to progress due to inferior H2H record. So, Inter need three points to mathematically secure the knock-out stage. In other words, they would qualify by beating the bottom-placed side Viktoria Plzen earlier in the evening. A defeat or draw for Inter in that match, however, would keep Barcelona alive.

Barcelona were impressive against Athletic Bilbao on Sunday night. They beat the Bask outfit 4:0, thanks to the goals scored by Ousmane Dembele, Sergi Roberto, Robert Lewandowski and Ferran Torres. I believe the players confidence is now higher, particularly knowing it was the second victory in just three days. Previously the Catalans have outplayed Villarreal. Seven goals scored and two clean sheets are exactly what Xavi needs. He has some injury issues ahead of Wednesday's clash. Ronald Araujo, Andreas Christensen and Memphis Depay are likely to remain on the sidelines. In addition, Sergi Roberto has dislocated his shoulder against Bilbao, so Hector Bellerin could start at right-back. Gavi is rated as doubtful after suffering a blow to his abductor against Athletic. Frenkie de Jong should keep his spot in the starting eleven, while three players are in battle for left-back: Marcos Alonso, Alejandro Balde and Jordi Alba.

Bayern played excellent in the Champions League so far and recorded four wins from four matches. The Bundesliga Giants have netted 13 goals and only Napoli are better with 17. Bayern managed to beat Inter and Barcelona with the same 2:0 in their opening two group fixtures before doing the double over Plzen, winning 9:2 aggregate. The Bavarians registered a 2:0 victory over Hoffenheim in the Bundesliga on Saturday. Coach Julian Nagelsmann is doing a solid job, but must deliver some trophy. Four players are out injured for Bayern - goalkeeper Manuel Neuer, Lucas Hernandez, Leroy Sane and Bouna Sarr. That means Ulreich will once again start between the posts. His confidence is surely higher after kept the net untouched against Hoffenheim on Saturday. Sadio Mane could lead the line, with Kingsley Coman and Serge Gnabry featuring on the flanks.

Barcelona are in danger of group stage elimination in the Champions League for the second straight season. Most probably Inter will do their homework against Plzen earlier, so I expect a "relaxed" approach from Xavi's men regarding the pressure. Lewandowski will be very motivated against his old employees, so I expect to score. Bayern, meanwhile, are like scoring machine, only Napoli have better record after the first four rounds. I will also mention that Neuer won't play through injury. As conclusion, I expect an efficient match at Camp Nou. 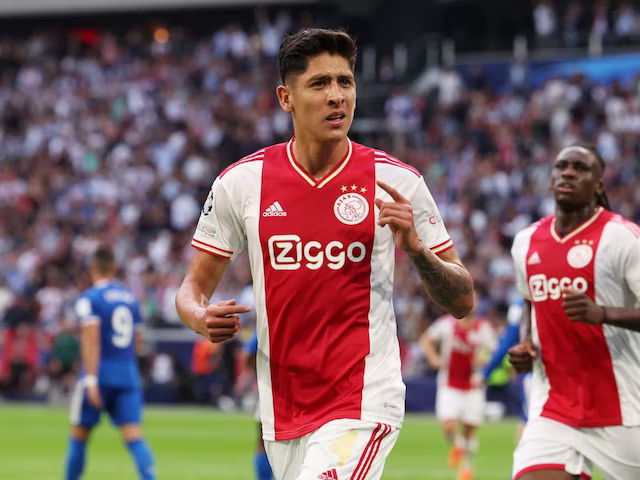 Ajax welcome Liverpool to the Johann Cruyff Arena in a very interesting clash on Wednesday night. It is a "do or die" match for Ajax. The Dutch Giants must beat Liverpool to remain competitive in the battle for the second place in Group A. Liverpool, meanwhile, will secure progress to the knock-out stage with draw, but a victory in Amsterdam will mean they are still in the race for the first place. Knowing Jurgen Klopp, I believe the Reds will also play for the victory, so I expect an interesting game. Ajax were impressive in the opening match of the competition, winning 4:0 against Glasgow Rangers. However, three defeats in the next three rounds brought them close to elimination. One of them was very painful, Ajax lost 6:1 to Napoli at home. The high defeat had huge impact to the players confidence and coach Alfred Schreuder had a challenging task to repair the damage. And it seems he was successful, at least domestically. Ajax managed to beat Excelsior and RKC Waalwijk, scoring 11 goals in the process. Most of his players are ready, but Ahmetcan Kaplan, Devyne Rensch and Mohamed Ihattaren are out injured, while Kenneth Taylor is rated as doubtful. Mohammed Kudus should displace Brian Brobbey, despite the fact he scored a brace against Waalwijk at the weekend.

This is a very bad season for Liverpool. Of course, there were some good moments, like 9:0 win over Bournemouth or 7:1 win against Rangers. The narrow 1:0 win against Manchester City also pleased the fans. But there were lot of frustrations too. The last defeat to Nottingham Forest during the weekend was "hard to swallow." It is true the Reds were missing Luis Diaz, Diogo Jota and Darwin Nunez due to injury, but they still had a solid offensive power with Mohamed Salah and Roberto Firmino in attack. However, Liverpool failed to score for the second time this season. To be worse, the ex-Reds Taiwo Awoniyi shocked the former employees in the 55th minute. Jurgen Klopp came under enormous pressure, the biggest in the last seven years. In addition, the German coach has big injury issues. Luis Diaz won’t be available until after the World Cup. Diogo Jota and Joel Matip are also out due to injuries. Alex Oxlade-Chamberlain has recovered and played in the second half against Nottingham, but he was not included in the Reds' Champions League squad as the midfielder was not expected to be ready in time to play in the group stage. On the positive note, Darwin Nunez, Thiago Alcantara and Ibrahima Konate are available after recovering from their injuries. The trio will almost certainly come into the starting eleven should they be deemed available.

I expect an open and high scoring match in Amsterdam. Ajax have no space for calculations, draw is not good enough for them. So, they must attack. And that's what Klopp like. Liverpool will have lot of space and they will try to take advantage. The Reds were unable to play against Nottingham and their "catenaccio", but Ajax are different team with different philosophy. I think there will be at least four goals.