In this match, coach Solskjaer turned a number of positions in the squad when Van de Beek and Cavani started from the first match. This is the first time, 2 rookies get the main kick at MU. 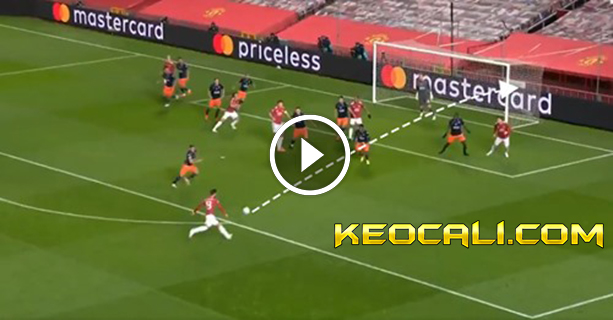 With the passing quality of the team and the decision to repay the debt in the away match, the Red Devils forced the opponent right after the opening whistle. Rashford had his first chance after just 2 minutes, when he eliminated a series of Istanbul players and rushed into the address of the penalty area.

However, the English striker's 2 points could not beat Gunok with his teammates' lining. Not having to wait long, Bruno Fernandes opened the goal party with a rocket shot outside the box.

Starting from Telles's left corner, the visitors' defender hit the ball to Bruno who was waiting outside the box. BĐN midfielder launched a class match kick to put the ball into the main frame to open the score matches.

Having an early goal, MU played more comfortably and elegantly. Chances were created in front of Istanbull's goal. The pressure on the team's goal was quite large, the Gunok goal was harvested with a mistake of catching the ball after a cross from Telles.

Bruno Fernandes was in the right position with the falling ball and scored 2-0 to make the score 2-0 quite easily.

After guiding 2 goals in front, the games of coach Ole Solskjaer actively reduced the pace of the match, turning back to the counterattack position. By the 33rd minute, Rashford had an acceleration phase into the Istanbul penalty area after a line from the defense and the opponent's defenders.

Rashford was the one who took advantage of the roots to score the third goal for Manchester Reds.

In the second half, Ole withdrew Bruno Fernandes, Rashford and Wan-Bisska and replaced with Greenwood, James and Williams. This change made the stance a part of Istanbull BB.

The visitors have a shortened goal after a free-kick from a distance of nearly 30 meters by striker Turuc. De Gea's goalkeeper flew all over the ball, but the technology had identified the ball through the line.

Istanbull found his squad to get better, but he got a chance to go upstream but was hit by the injury code after injury time. Van de Beek intelligent slot for Greenwood to cross before there is a horizontal line for James to set a 4-1 victory for MU.

Debit successfully, Man United also monopolized the top of Group H with 9 points. PSG in the match at the same time defeated RB Leipzig with the minimum rate, thereby surpassing the German team to climb to second place. These two opponents are 6 points, 3 points behind Man United.

Let KeoCali.com review the super product of Bruno Fernandes through the video link below!