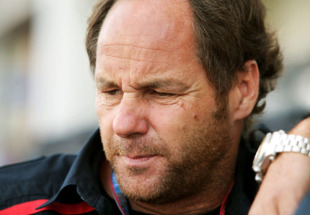 Gerhard Berger has predicted that Michael Schumacher will retire from Formula One for good at the end of the 2012 season.

The seven-time world champion, who first quit the sport in 2006 before making his return two years ago, is entering the final year of his contract with Mercedes GP.

Schumacher has struggled to match the pace of team-mate Nico Rosberg so far, although the 43-year-old's performances did start to pick up towards the end of last season.

The strong finish saw Schumacher end the 2011 campaign just 13 points behind his fellow German, a vast improvement on the 54-point deficit he endured the year before.

But former McLaren and Ferrari driver Berger thinks that Schumacher will not renew his deal at the end of the season.

"I do not think he will extend his contract. At this point I think it will be enough," The Austrian told Auto Moto und Sport.

"He has no chance against Rosberg. He will have to admit that at more than 40 years old he cannot beat a young driver at his level." - www.skysports.com/

Get the great odds for soccer betting at 12 BET.com sportsbook. Good Luck!!!

Rosberg is a good driver. This year the competition is very fierce and people have to ask if Schumacher needs to prove himself anymore. If he goes this season as the #2 guy behind Rosberg he will rather retire.
http://f1-bettings.com Formula 1 racing
Share:
Facebook Twitter Reddit Pinterest Tumblr WhatsApp Email Share Link
Top